Home /All News/Carthage crash sends two to the hospital 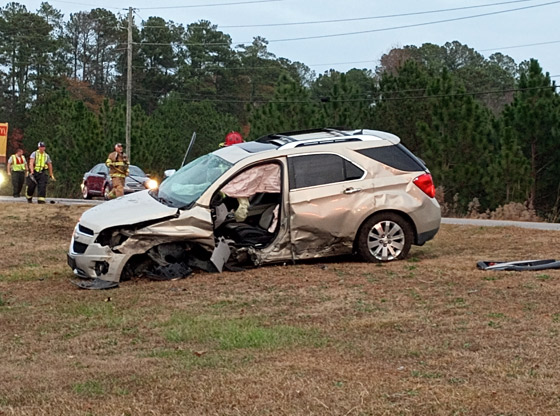 An accident in front of Carthage Municipal Building on Highway 15-501 sent two people to the hospital. The accident occurred just before 4:30 p.m. Wednesday.

An Audi passenger car and Chevrolet Equinox SUV collided near the centerline as the car was heading north toward Carthage, and the SUV was heading south.

The car came to rest in the southbound lane. The impact knocked a tire off of the Audi. The male driver of the car refused transport to the hospital by EMS.

After impact, the SUV spun off the road. The driver of the SUV was trapped, and the door had to be taken off by firefighters. Due to the driver being trapped, Cypress Pointe was called in as a second rescue.

According to Chief Tyner of Carthage Fire and Rescue, the driver and one passenger of the SUV were taken by Moore County EMS to Moore Regional Hospital with non-life-threatening injuries.

The exact cause of the accident is under investigation by the Carthage Police Department.

Rockwell Towing assisted with the removal of one of the vehicles.

Traffic on Highway 15-501 was down to one lane for an extended time for cleanup. Northbound traffic was backed up nearly a mile.

The Moore County Sheriff’s Office also assisted with the accident.

~Article and photo by Sandhills Sentinel Reporter Curtis Self. Contact him at [email protected].