A Southern Pines crash slowed traffic on U.S. 15-501 to a crawl for over an hour on Monday, June 13. Around noon, first responders received a call for a two-vehicle crash that left the occupants of one vehicle trapped within their truck.

The vehicles collided outside of Chick-fil-A when a GMC Sierra exited the plaza’s parking lot and was struck by a Ford F-150 traveling north. Subsequently, the Ford sustained heavy front-end damage while the GMC was predominantly damaged on the front driver’s side.

Though the occupants of the GMC were initially trapped within their vehicle, first responders were quick to arrive and cut them free. The door of the vehicle had to be removed to allow the driver to safely escape.

The driver of the Ford was transported to the hospital from the crash via EMS. Their condition is currently unknown at this time. The occupants of the GMC remained on the scene to speak with first responders until they could be safely escorted from the highway.

Northbound traffic on Highway 15-501 was brought down to one lane until emergency response crews were able to remove the wreckage from the highway, resulting in delayed traffic for over an hour. Southbound traffic was also slowed as passersby navigated their way around the scene.

Emergency response crews worked tirelessly in sweltering heat to clear the scene of debris, direct traffic, and ensure the safety of individuals who remained on the scene. 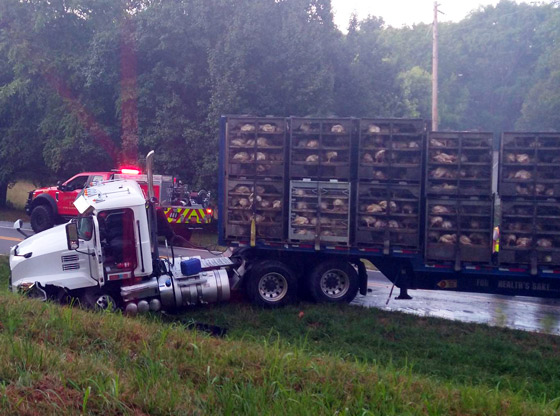