Holly’s Nest Animal Rescue rehabilitated and released 22 white-tailed deer fawns from Moore County. They rescued a total of 134 from across the state this year and released them in graduated time periods. On Sept. 19, they released 28, the last of the rehabilitated fawns into the forest near Deep River in Sanford.

Byron and Kim Wortham own and operate the licensed animal rescue located in Sanford. From April through Sept., their days and nights are centered on the fawns.

“They come in with the umbilical cords still attached,” Byron said. “A citizen stopped when he found a fawn in the middle of the road in Moore County, and they looked around and found Mom had been hit by a car. I met them at 10 o’clock at night to bring that orphan in.”

In most cases, citizens who discover orphaned fawns meet Byron in a public place for Holly’s Nest to attain the animal. Wildlife officers brought six orphaned fawns to the facility.

Visitors are not allowed at the animal rescue due to state regulations.

Of the many regulations for animal rescue, keeping track of released animals is a major rule.

Byron Wortham explains why white-tailed deer fawns must be released with a tag on September 19, 2021, at his facility in Sanford.

“The biggest hurdle is stress. It flip-flops their tummies. We do everything we can, but sometimes they die,” Kim said about the orphaned fawns. “We found that Pepto-Bismol is really good.”

The Worthams feed Ultra 24 Multi-Species Milk Replacer in bottles. Each fawn consumes 8 to sixteen ounces at each meal. They spend hours cleaning bottles, preparing the formula and setting up the bottles into holders.

They also feed loose oatmeal flakes, deer pellets, corn, kale, blueberries and grass. They harvest grapevines with healthy leaves and honeysuckle for the fawns to learn what to eat in the forest.

The doors to the deer enclosures stay open after release, allowing open access to feed sources as the fawns learn to live in the wild.

“Get in touch with Holly’s Nest if you have abundant land and want to be a part of rehabbing wildlife,” Byron said.

Holly’s Nest rehabs and releases a variety of native North Carolina species, such as skunks, hawks, beavers, foxes and songbirds.

The same day as the fawn release, five foxes and two screech owls were released.

Mary Lou Jones owns Twelve Oaks Nature Preserve in Sanford and asked Holly’s Nest to release four gray foxes and a red fox among her pet Guernsey cows that live on the preserve as pets. Upon release, the foxes ran to the pond.

The family of gray foxes are from a Goldston church. The people believed they had a litter of puppies and contacted Holly’s Nest, which has the special license for rabies vector species — carriers of rabies. Each fox is tested by a veterinarian for rabies.

The gray foxes are expected to live as a small family, called a leash of foxes.

The red fox is from the Outer Banks.

“I got a call from a wildlife officer about a baby. It was at night and Mom was run over,” Byron said.

The five foxes were rehabilitated for three months before release.

Red foxes climb trees, and gray foxes do not. Red foxes are larger than gray foxes and both make dens in the earth or make homes of hollow trees.

That same afternoon, two Eastern screech-owls were released at Holly’s Nest. According to Byron, the screech-owls screech when they mate and are the smallest raptor in North Carolina. They eat rodents, worms, and insects. 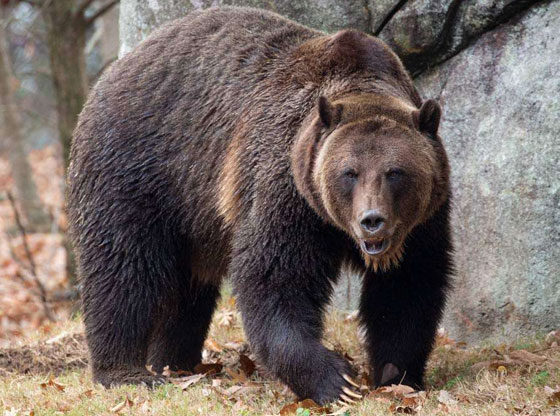