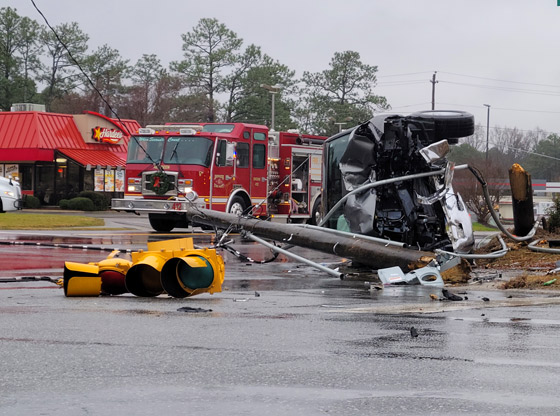 A single-vehicle crash in Aberdeen on Thursday resulted in significant traffic delays and brought down utility lines and traffic lights. The wreck occurred just after 10 a.m. and resulted in delays for Moore County commuters.

The wreck occurred at the intersection of Magnolia Drive and U.S. 1 near Tidal Wave Auto Spa. According to authorities on the scene, a Dodge Ram flipped and struck a utility pole, proceeding to bring down utility lines and traffic lights with it. The official cause of the crash is still under investigation, and it’s unclear at the time of this report if anyone was hurt. The Dodge suffered extensive allover damage, having rolled and crashed into nearby obstacles before landing on its side in front of the Exxon gas station.

Traffic in both directions came to a complete standstill. Both northbound and southbound lanes were halted while first responders worked to divert traffic around the accident scene. Subsequently, commuters were redirected through parking lots until the highway was cleared. Traffic was backed up as far as the eye could see in both directions.

Duke Energy and NCDOT were called in to repair damaged equipment, downed lines, and assist first responders in clearing debris. The Town of Aberdeen issued an official statement around 11 a.m. urging commuters to avoid the area and plan alternate routes if possible due to the extent and severity of the damage. “Magnolia Drive entrance to access Hwy. 1 is closed,” said the Town of Aberdeen in a second statement around 1 p.m. “Work to repair the power pole and stop light is estimated to be 14-16 hours.”

First responders worked in the cold rain to remove the debris and clear the wreckage from the scene as quickly and safely as possible. Responding to the scene were the Aberdeen Police Department, Aberdeen Fire Department, Moore County EMS, Duke Energy, and NCDOT.