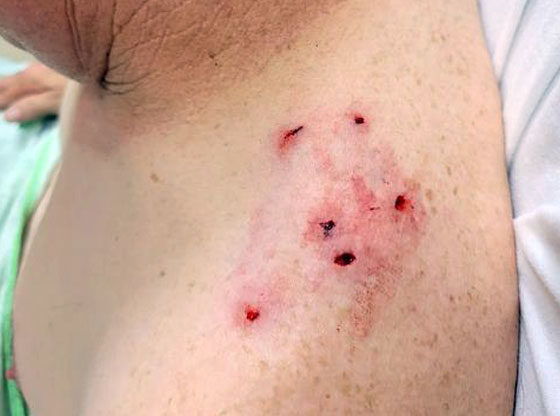 Scott Jackson was attacked by a bobcat at his home in Eastwood on June 4.

He said he and his wife, Randy Jackson, were carrying in groceries when a growl was heard from behind the vehicle. He noticed the chickens scattering and yelling and instead of leaving the area, he went toward the growl.

Jackson said the bobcat crawled up his back, and he endured 12 puncture wounds.

“He had me face down in the carport,” Jackson said.

Because bobcats normally do not attack humans and are known as ghosts in the forest, Jackson was told to get rabies shots.

He completed the series of shots last Friday, June 18.

The Moore County Sheriff’s Office provides a report on the June 4 bobcat attack with a supplemental statement on June 8.

The report states a bobcat in the same area was killed hours after Jackson was attacked. It tested positive for rabies. “Still kind of odd to go outside and not think about it,” Jackson said. “The only words of wisdom I can give you on this is if you hear a growl, don’t go near it.”