A collision in Pinebluff on Friday afternoon resulted in the hospitalization of all parties involved in the crash. The wreck occurred in front of Nic’s Pic Kwik at the intersection of U.S. 1 and West Baltimore Avenue around 3:00 p.m. and took first responders over an hour to completely clear.

The two-vehicle accident occurred when a Toyota 4Runner traveling south on U.S. 1 collided with a Nissan Altima entering the highway from West Baltimore Avenue. The intensity of the impact caused the Toyota to veer to the right and flip over the curb where it landed upside down. Both vehicles sustained heavy damage all-over, and the wreck additionally brought down nearby signage.

According to authorities on the scene, everyone involved in the crash was transported by EMS to the hospital, including both drivers and all passengers of the Toyota. Their conditions are unknown at this time. The cause of the collision is still under investigation at this time.

Traffic on U.S. 1 was brought down to two lanes while drivers were diverted around the wreck, and one lane while the vehicles were removed from the highway by tow trucks. First responders worked to clean debris, remove parts of the wreckage, and safely direct traffic around the site of the crash. 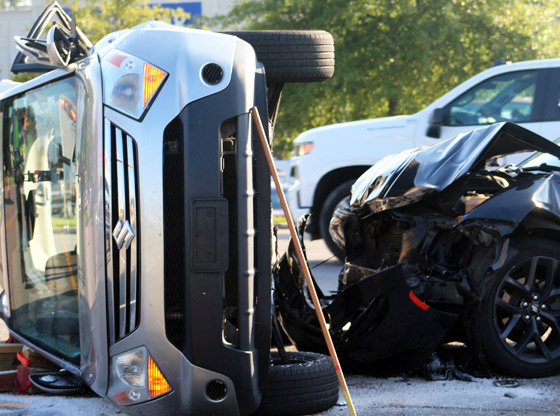