Dr. Daniel B. Coupland was the guest speaker on Oct. 23 for a Sandhills Classical Christian School (SCCS) event. His presentation, A Wardrobe of Images: Cultivating Wonder, was a lecture on why wonder is imperative to learning and that learning is lifelong. SCCS Headmaster Dell Cook introduces guest speaker, Dr. Daniel B. Coupland, on Oct. 23, 2020, at a Pinehurst event held at the home of John and Elizabeth Stamas.

“As an educator, it is important to remember that wonder is a key component of education because education without wonder is incomplete,” Coupland said.

Author J.R.R. Tolkien was referenced by Coupland on the condition of triteness being the penalty of appropriation. According to Coupland, lack of originality results in lack of new ideas and discoveries and said that is why children need fairy stories – to cultivate wonder.

Several Bible passages were referenced by Coupland. Psalm 139 was interpreted on its message of astonishment and fear. Corinthians 1-10:13 answered the question, “What is the cheap side of man.” Proverbs 9-10 and Isiah 8:6 answered the question on why wonder is important to the moral imagination.

The event was held at the home of John and Elizabeth Stamas in Pinehurst. They have two boys attending SCCS.

Coupland is an advisory board member on the Institute for Classical Education and is the Professor and Chairman of the Education Department of Hillsdale College in Michigan.

The conservative college was founded in 1884 by abolitionists. Frederick Douglas spoke on the campus twice, and the college possesses the original “best photograph of him ever taken,” according to Coupland.

SCCS board members, parents, grandparents of students and interested parents attended the event, filling the 48 chairs. Matt and Belinda Furby are served by Wolcott’s Restaurant.

Matt and Belinda Furby of Pinehurst have two grown daughters who attended SCCS and said that their daughters attribute their classical educations to their success.

“They learned reason and thinking,” said Matt, “but not necessarily aligned with ours.”

The Furby’s now have two grandchildren attending SCCS. Belinda was an instructor when SCCS first opened, and Matt is a board member. 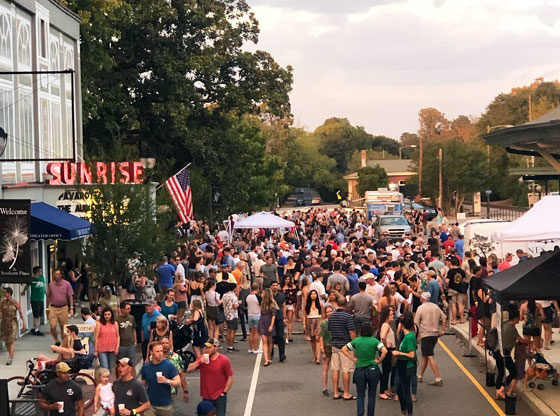