Moore 100 hosted guest speaker John Silverman on Oct. 27 in the Grand Ballroom at the Carolina Hotel in Pinehurst. Silverman is the managing principal of Midland Atlantic, developer of Morganton Park South in Southern Pines, which will includes a Target store.

Construction on the $80 million investment begins next week, and developers expect Target to open in October of 2024.

The shopping center, located off Morganton Road, will host a Five Below discount store and a Golf Galaxy Performance Center, which will be first to open in the summer of 2024 before the U.S. Open. The center will be home for Dick’s Sporting Goods, HomeGoods, and Target.

To facilitate speedy fulfillment of online orders, the stockroom is on the side of the Target building instead of the rear, so orders may be rushed to the front of the store for pick up.

The shopping center’s layout is mindful of the shopping experience. Past Target on the left will be a courtyard with a trellis leading to restaurants. The restaurants were not named.

Morganton Park South is on 44 acres, with 32 acres of retail and 12 acres of residential.

Zimmer Development Co. in Wilmington designed the 267 multi-family residential dwellings with a courtyard transition into the retail.

Several water features are incorporated into the courtyard layout with walking paths. 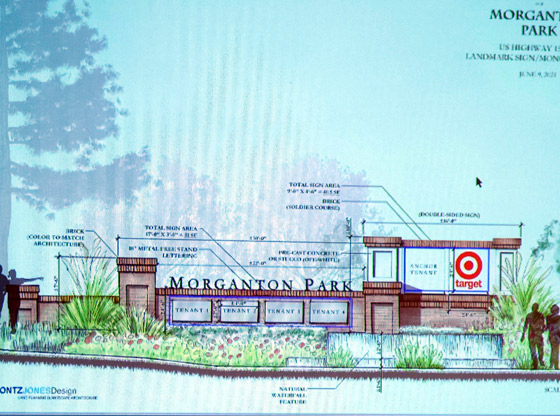 Photo: Silverman shares a rendition by Koontz Jones Design of the U.S. Highway 15-501 parkway entrance Oct. 27, 2022 at the Moore 100 meeting at the Carolina Hotel in Pinehurst.

The parkway, a four-lane entry off Morganton Road and Highway 15-501, is expected to be complete by December 2023.

Developers will enhance the existing cemetery on the property with a white picket fence and walking paths and benches to embrace the history of the community.

Silverman is a graduate of the University of Denver and grew up in Kansas City, Missouri.

“I learned Walmart was coming out of the Ozarks. I was twenty-two years old and contacted Walmart and found someone as green as me,” Silverman said about developing his first Walmart shopping centers. “We own a lot of Walmart and Targets.”

The occupancy rate for Midland Atlantic’s stores is 98%.

“We are not merchant builders. We will not sell our buildings,” Silverman said.

“We know our tenants,” Silverman said, about being small enough to be nimble and entrepreneurial to assist with issues as they arise.

“Our capital division is large enough to go over hurdles to place a development,” Silverman said about the two-year process of meeting Southern Pines’ development requirements. 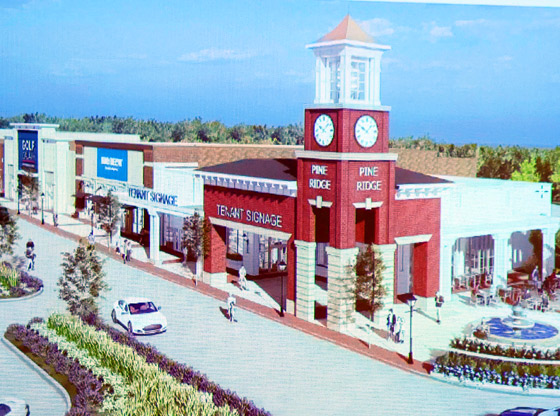 Photo: John Silverman shares a slide of Morganton Park South’s architectural rendering at the Moore 100 meeting Oct. 27, 2022, at the Carolina Hotel in Pinehurst.

The reception was sponsored by LKC Engineering.

Feature photo: Midland Atlantic presents a slide of an architectural rendering Oct. 27, 2022, of the Target store for Morganton Park South at the Moore 100 meeting in the Grand Ballroom at the Carolina Hotel.